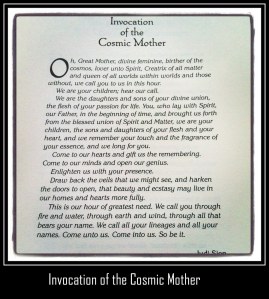 Awakening to one’s Inner Goddess begins with the ability to embrace the Feminine Divine. Her presence balances male and female energies for both genders.

“Our deepest fear is not that we are inadequate. Our deepest fear is that we are powerful beyond measure. It is our light, not our darkness that most frightens us. We ask ourselves, ‘Who am I to be brilliant, gorgeous, talented, fabulous’? Actually, who are you not to be? You are a child of God. Your playing small does not serve the world. There is nothing enlightened about shrinking so that other people won’t feel insecure around you. We are all meant to shine, as children do. We were born to make manifest the glory of God that is within us. It’s not just in some of us; it’s in everyone. And as we let our own light shine, we unconsciously give other people permission to do the same. As we are liberated from our own fear, our presence automatically liberates others”.  -Marianne Williamson

​For thousands of years, the world has been ruled by patriarchal societies. These masculine rulers have created wars, power struggles, destruction, pollution, fear, pain, separation and famine. They have shown little or no respect for feminine wisdom or our Mother Earth. The patriarchal organizations of the world have repressed most knowledge of women’s roles in world history.

It is time for the pendulum to swing back towards the Divine Feminine and rest comfortably in the middle. To become whole, we need both the Divine Feminine and the Divine Masculine energies equally in our lives.It is without a doubt that our religion and culture have made a huge impact on how women perceive their worth.  As a child, I remember hearing Bible stories about women and feeling their shame.  The words “unclean”, “slave” and “concubine” were heard a lot.  In the book of Genesis, woman is blamed for the downfall of man.

In Exodus, daughters were sold as maidservants. In Deuteronomy, virgins who were raped were to be stoned to death with their rapist. There is a long list of limitations, exploitations, punishments and repressions for women in the Old Testament , which I feel initially set the stage for what came forth in societal roles of women. In many ways the mindset is still present today.  For example, a woman who has a few sexual partners is called a slut, while a man is a stud.

In ancient societies, it has been theorized that women were worshipped as goddesses, honored and held in high esteem.  The Minoan religion was heavily involved with iconography and the depiction of women as Goddesses to worship was a supposedly common occurrence. These depictions include wall paintings, seals, stone-carvings, and sculptures. The art often combined the Goddesses and Gods with scenes of nature, as within the Minoan culture, the two were intrinsically linked. 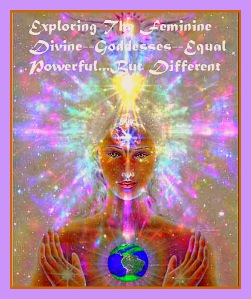 Exploring and Embracing the Feminine Divine…Equal and Powerful but different.

It is theorized that the old European culture stressed the female as divine, largely based on the number of carvings of the female shape found from this era. Some point to the relative lack of equivalent male statues as evidence of a Goddess culture.

This “old European” culture lasted for tens of thousands of years in what is now Europe. They generally lived in peace; there is a notable lack of defensive fortifications around their hamlets. As evidenced by their funeral customs, males and females appear to have had equal status. Many historians and archaeologists believe that their society was matrilineal; children took their mothers’ names. Life was based on lunar (not solar) calendar and time was experienced as a repetitive cycle, not linearly as we think of it.

Many academics believe that the suppression of Goddess worship in Western Europe occurred a few thousand years BCE, when the Indo-Europeans invaded Europe from the East. They brought with them some of the “refinements” of modern civilization: the horse, war, belief in male Gods, exploitation of nature, knowledge of the male role in procreation, etc. Goddess worship was gradually combined with worship of male Gods to produce a variety of Pagan polytheistic religions, among the Greeks, Romans, Celts, etc. Author Leonard Shlain offers a fascinating alternative explanation. He proposed that the invention of writing  rewired the human brain, with profound consequences for culture. Making remarkable connections across a wide range of subjects including brain function, anthropology, history, and religion.

Shlain argues that literacy reinforced the brain’s linear, abstract, predominantly masculine left hemisphere at the expense of the holistic, iconic feminine right one. This shift upset the balance between men and women initiating the disappearance of goddesses, the abhorrence of images and in literacy’s early stages, the decline of women’s political status. Patriarchy and misogyny followed.

In some religions, a sacred feminine archetype can occupy a very central place in prayer and worship. In Hinduism, Sacred Feminine or Shaktism is one of the three major Hindu denominations of worship along with Vishnu and Shiva. In Tibetan Buddhism, the highest achievement any person can achieve is to become like the “great” female Buddhas (e.g. Arya Tara) who are depicted as being supreme protectors, fearless and filled with compassion for all beings.  So, as you can see, the strengths of women are as equally important as those of men.  Our long history of programming has created a perception that women are the weaker of the two species when in fact, we are equally strong, just different. Together we form the yin and yang.

Now, more than ever, we see the shift of the feminine energies taking on a stronger role in our world.  This is something that has to take place in order to create balance and harmony. We all hold the power within ourselves to create this balance, but first we must understand and appreciate our worth.  Unless we recognize our own worth and until we respect and honor the very essence of our being, no one else will see our value. We must awaken that warrior within, the one who has always existed there.